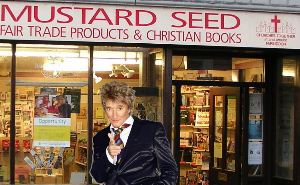 As you can see from the photo on the right,  Rod Stewart happened to pop in to the Mustard Seed the other day - on his way to Wembley (I think he may have been lost).


"This shop rocks man - Yeah! " he throated - in his characteristically gravelly voice.

"Did you know that Sinepiseemned is the Estonian for Mustard Seed? "
I didn't.


"And this stuff is good enough to eat!" - he said, picking up a bottle of the new Guatamalan squeezy honey. "Perfect for porridge! "


"I see you have a SALE on?  Need a hand to shift the merchandise? " he grated.


Well - rather tentatively - I  suggested he might like to write a song that we could perhaps use in our marketing.


His reaction was pure Rod.


Five minutes later - on the inside of a beautiful handmade hand-embroidered Bangladeshi humming bird card - Rod had penned the following oddly familiar verse :


We are Saling ,  We are Saling
Fairly Trading, From cross the Sea,
We are trading ,  with poor farmers,
To release them, from poverty!


And then - right there - he picked up his air guitar - and launched into song.  Fantastic!   Especially the solo guitar work .


"Or - would it work better in Estonian?"  he replied - extracting another handful of gravel from the back of his throat.  "By the way - D'you need your driveway doing?"


At which point, his stretch limo took out another bollard whilst trying to negotiate the right hand turn round the marketplace.

Anyway - LOSE the thought of the bollard - that really isn't relevant to this email.   It's the Sinepiseemned SALE that's the news here (Sorry - been around Rod too much - I keep dropping Estonian into the conversation) .


Yes - as Rod played so beautifully on his air guitar (you had to be there) it's SALE time at the Sinepiseemned!


So - to cut a long email short - Pop in to the Sinepiseemned to P-P-P-Pick up a Penguin (well - blue elephant that looks a bit like a penguin anyway )  . 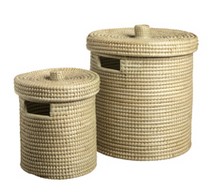 "Wow - those baskets would be great for putting grandchildren in!"


"And did you know that trawets dor is Rod Stewart backwards ? "  - Rod asked on his way out.